In 2007, I worked in one of the best places Africa has to offer: Ngala. Ngala means ‘lion’ in the local Shangaan language. Ngala is situated in the middle-western part of the world-famous Kruger National Park. It spans over 14,000 hectares (around 30,000 acres.) It is a true paradise and it is every wildlife enthusiasts’ dream.

The conservation area has only two dedicated camps in a region greater than some well-known cities in the world. One camp is Ngala Safari Lodge, and the other is Ngala Tented Camp. I worked at Ngala Tented Camp, where we could only house twelve guests at a time. It was exclusive and interactive. In fact, all of the andBeyond (a safari company) camps are interactive and entertaining for both their international and local guests.

I have a story that needs to be told, and being a safari guide and not a writer, I ask you to listen to my tale and try to envision this remarkable experience. It really happened–on a magic day in the heart of Kruger National Park. 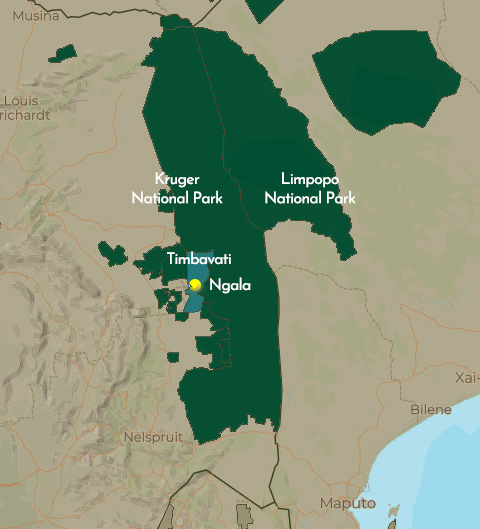 Typically, in the winter months, we allowed our guests to sleep in for half an hour longer than the hotter summer months, as it will be a little cooler and darker. Guests at Ngala Tented Camp would get tea, coffee, hot chocolate or even an alcoholic cream liquor called Amarula. Beverages would be delivered to each guest in their glamorous tent at around 5:30 a.m.

I was only twenty 21 years old then, and having to wake up before 9:00 am should have been a sin. But in Africa, there is a surprise waiting every morning when you wake up in the bush.

After early morning tea and coffee and greeting our guests, I and my trusty tracker, Adam, decided we were going to head south that morning in search of, well, anything exciting.

Ngala is such a vast wilderness area, one never knows what might be seen.

The Timbavati river runs through the concession and attracts a variety of wild game on a daily basis. This river is predominantly dry throughout the year, but still had a large quantity of water below the sandy surface causing large Jackalberries, Appleleaf, and many hard woody trees to grow. Typically, any safari guide would know this can be a good place to start to search for some good game viewing.

We drove along the river’s edge for a good hour, Adam turning his head slowly and rhythmically scanning for fresh tracks on the ground. Perhaps we could spot a leopard lying in a tree. Once we reached a certain point along this non-perennial river, we decided to head south. I drove with hundreds of guests every year, so honestly I can’t remember clearly who the other 6 people in our vehicle were, but I do recall one lovely lady in my vehicle who was from one of the southern states in the USA.

She had a very deep gruff voice from smoking a copious number of cigarettes in her early years, but that hadn’t stopped her to stop from continuing to smoke later in life, as we found out when she lit up a Camel filter at our drinks break while on the afternoon drive the day before. I’m going to use the name Mary as I cannot for the life of me recall her exact name. Mary hopped in the back row of the Land Rover with her husband, and the other guests filled up the two front rows.

After heading south past one of the watering holes, we turned into an area where the soil type changed from hard red soil to a type of black cotton soil. This black soil was never a good place to drive after it rained. The soil turned from a soft, cotton-like looking soil when dry to a dangerous clay that would stop even the toughest bush vehicles in their tracks when wet.

Thankfully it was one of the dryer months and so we had no concerns about moving through the area. The land was sparsely populated with trees called Knob-thorn trees. Knob-thorns are part of the Acacia family and have these tiny little knobs spread out all over the trunk of the tree to prevent any attacks on it. The point is that on the surface of the ground nothing else really grew except these trees, so it was very open.

We were rambling along at a speed of around 20km/hour when Adam turned his head calmly towards me and said ‘lion’.

Without ever questioning his incredible spotting ability, we all looked to our left and there was a lioness with two cubs around nine months old, lying peacefully under a Knob-Thorn. Adam and I both knew exactly who this female lion was, as lions are territorial within a specific range.

This lioness had been ostracized from one of the larger prides in the region some time back. I positioned the Land Rover about ten meters from the small pride so that everyone could see them clearly, then I shut down the big V8 engine. All six guests started clicking away with their digital cameras and I sat in silence, waiting to explain to everyone what these feline creatures were up to.

Once everyone had captured their next award-winning National Geographic shot, I quietly interpreted the circumstance of who this lioness was, why she had been left out of the major dominant pride of Ngala, and why they were doing absolutely nothing except lying around.

Everyone listened and asked questions for about 10 minutes. We then sat still and observed the sleeping lioness and her two little ones. Twenty minutes had passed and all three lazy cats were still sleeping in the shade of the acacia tree. Lions can sleep and rest for up to twenty hours a day, I explained to the six international travelers, so we should move on to search for something else and perhaps come back to see if this lazy family of felines had moved at all.

Within seconds of me saying that, the large female lioness suddenly popped her head up in a very peculiar way. Mary, the guest who smoked more cigarettes than an average long-haul trucker, shouted loudly “Ryan, what’s that over there?” I turned around quickly to see what Mary was pointing at, trying not to position myself higher than the first row behind me, as that could break the outline of the vehicle and scare off the lions. I couldn’t see a thing because Mary was positioned in the back row of the vehicle. But what she saw behind us would imprint a memory for the rest of my life.

The lioness had her head held high and was now sitting rather than lying on her side. Remember she was only about ten meters from the left of our vehicle. Adam, who had been tracking for many years, was now also sitting in complete anticipation. In South Africa the driver’s side is on the right-hand side of the vehicle, so whatever was happening behind us on the left-hand side was impossible to see. There are no front doors on the vehicle, which makes it easier for guides to do a better job when guiding. We can more easily see tracks and more quickly jump out to talk about things we are showing our guests, like animal dung or flowers.

I looked to my right hoping to be able to see behind the vehicle. As I turned my head, from absolutely nowhere, a young impala lamb came sprinting past the vehicle in stress. When I say past the vehicle, the young antelope was within an arm’s length of us. Out of the corner of my eye I saw the large lioness sprinting within a few inches of the front of the vehicle, using it as cover for that split second. Adam was not moving. All of our guests sat in astonished silence. In the blink of an eye, the female lion ran not more than five feet, stuck out her left paw and tackled the helpless young impala antelope. All eight of us were now sitting breathless and helpless, watching this unfold. Mary was saying in her soft gruff voice ‘Oh my goodness’ repeatedly. Thankfully the large cat ended the fawn’s life almost instantly. The two cubs were so excited they ran over to Mom immediately as if she had just brought home the groceries on payday. Our front-row seat for this in-the-wild experience was intense and exciting at the same time–but it wasn’t over yet.

With all of our eyes fastened on the three lions and the small meal, none of us were looking around to see where this young impala had come from. Except for our local Shangaan tracker, Adam. I heard him say softly, “Dogs. Dogs behind us.” The African wild dog is one of the rarest creatures to see in the wild, with just barely three hundred left in the Greater Kruger Area. This sighting was an unexpected opportunity and a breathtaking privilege. (It took me over a year to see a rare wild dog at Ngala.)

Speechless was the only term. A pack of nine wild dogs was approaching us and the lions. Wild dogs are somewhat cheeky and they are very efficient hunters. They can travel for kilometers, maintaining speeds of 50-60km/h, tiring out their prey. I have also witnessed wild dogs terrorizing hyenas, nipping and biting them strategically until the poor hyenas run for their lives. Individually, wild dogs would be completely useless in the bush, but they work together as a pack, so very few animals will challenge them. The pack of dogs approached us and the lions with caution. Some started barking, but not a typical dog bark. It was a low, irritating bark as if they were telling the lion “hey–this was our meal and we did all the hard work.” A wild dog would never take on a lion, however. Lions are a lot quicker than most other large predators and they do not tolerate much interference.

At this point, I was trying to alert my fellow safari guides over the VHF radio to what was happening. Even as I was trying to speak, I knew it sounded like complete nonsense coming out of my mouth. Never in my wildest dreams did I think that watching sleeping, lazy lions would turn into snack time, then a lion/wild dog confrontation. My six guests were in complete shock and amazement. Adam seemed unruffled. We watched the dogs disappear back into the acacia woodlands, back on the hunt. For our lion family of three, it was just another day in Africa. 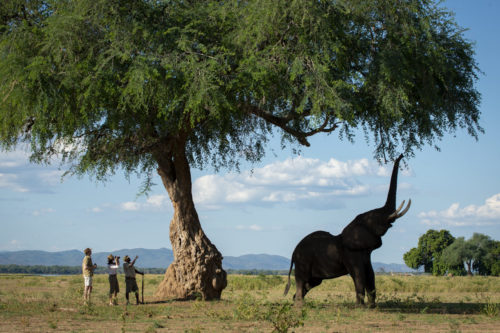 The Magic of Zimbabwe & Zambia 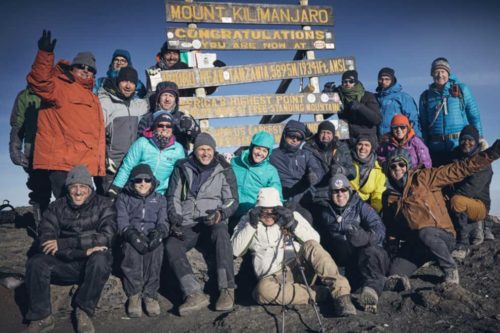 Kilimanjaro trekking and safari to Tanzania